It is sometimes possible to see a faint bright line that extends from the bottom of the image to the top of the image, passing through a light-saturated spot. This article describes this effect, called smear, and how to avoid it.

In the sample image below, a faint bright line can be seen that extends from the bottom to the top of the image, passing through the light saturated spot. 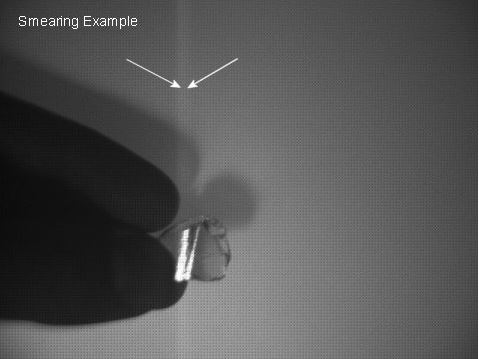 This bleeding effect is called "smearing," and is an undesired signal that appears as a brighter vertical (from top to bottom) stripe emanating from a bright part of the image. Smearing is a common problem in high light intensity settings.

During image readout, image pixels are shifted vertically downard, row by row, through the vertical transfer cells to the readout register. If there is any leakage of charge into an area of the vertical transfer register, it will be picked up and shifted downward, so that every pixel above and below the area will contain this extra charge. The result is a relatively bright vertical stripe across the entire image.

Effect of Integration Time and Lens Aperture on Smear

Smear is often more noticeable when using very short (microsecond) shutter times. This is because the amount of charge collected in the light-sensitive area of the CCD varies based on exposure time, whereas the amount of charge that collects in the vertical transfer register is based on the sensor readout rate, which is a constant. With short exposures, the ratio of time integrating in the photosensor to time integrating in the vertical transfer is reduced. This reduced ratio may exacerbate smear.

Another factor that affects smear is the angle that light hits the sensor. Many CCDs use on-chip microlenses that cover each pixel in order to increase sensitivity. When light hitting the sensor is not highly collimated (which is often the case with wide angle lenses), light can be refracted by the outer edges of the lens in such a way that it hits the light-shielded portions of the CCD.

Smear may be addressed by reducing the source of bright light hitting the sensor, reducing the aperture, and using a lens that more effectively collimates light. Other, more specific, measures for reducing smear include the following: